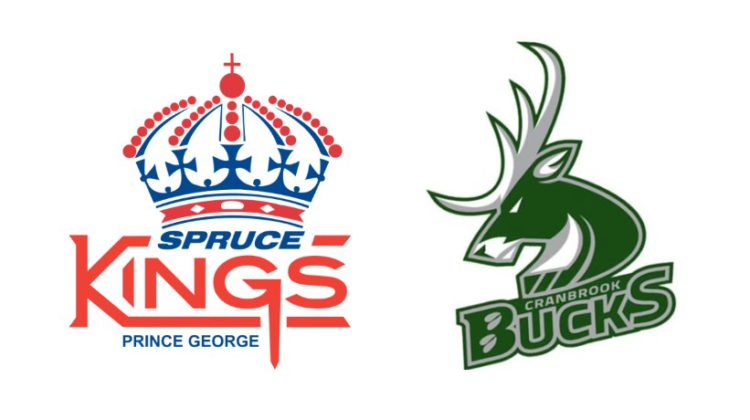 The Cranbrook Bucks and Prince George Spruce Kings exchanged victories over the weekend at Western Financial Place as the two teams continued their BCHL pre-season schedules.

Coming into the weekend, Cranbrook had exclusively played against the Trail Smoke Eaters, mostly as part of their Kootenay Cup series. Battling the Spruce Kings on Friday and Saturday as just their second official opponent since joining the BCHL, Cranbrook skated to a 6-2 win before a 2-1 loss.

Dane Dowiak had 5 points (3G, 2A) in Friday’s contest. Briggs Gammill (1G) and Michael Hagen (1G, 3A) opened scoring for the Bucks in the first, while Noah Quinn (1G, 1A) would net another goal in the second before Dowiak’s hat-trick.

Despite playing just 7 pre-season games to date, Dowiak has 13 points (8G, 5A). The Penn State commit is tied for third in pre-season goals, with the BCHL leaders having played 11 and 14 games respectively. Dowiak is also third in the BCHL with 1.86 points/game

Between the pipes, Jacob Zacharewicz made 19 stops in the 6-2 win.

Dane Dowiak puts the game out of reach for the @CranbrookBucks with a natural hat-trick ?????? pic.twitter.com/QZ8Qap9HiT

The Bucks and Spruce Kings would jump right back into game action Saturday afternoon to close out the weekend doubleheader.

Following their 6-2 loss on Friday, the Spruce Kings picked up a 2-1 victory over the Bucks.

Prince George fired 39 shots on goal while limiting the Bucks to just 14 shots. The Spruce Kings scored a pair of goals in the opening frame and never looked back.

Noah Quinn would net Cranbrook’s lone goal in the loss, while netminder Nathan Airey made 37 stops in the defeat.

It’s never a bad time to flash the leather, and @SpruceKings goaltender Aaron Trotter knows it – robbing Briggs Gammill with the glove. pic.twitter.com/DLOhndfvBp

After their back-to-back games this weekend, the Cranbrook Bucks gear up for a Thursday night matchup against the Merritt Centennials at Western Financial Place. That contest will be streamed on BCHL TV (HockeyTV) at 7:00 pm.

Following their weekday exhibition game against Merritt, the Trail Smoke Eaters roll into Cranbrook on Saturday for Game 6 of the pre-season Kootenay Cup series. Trail currently leads the series 3-2. Game time is set for 7:00 pm from Western Financial Place and will again be streamed on BCHL TV (HockeyTV) with a subscription.