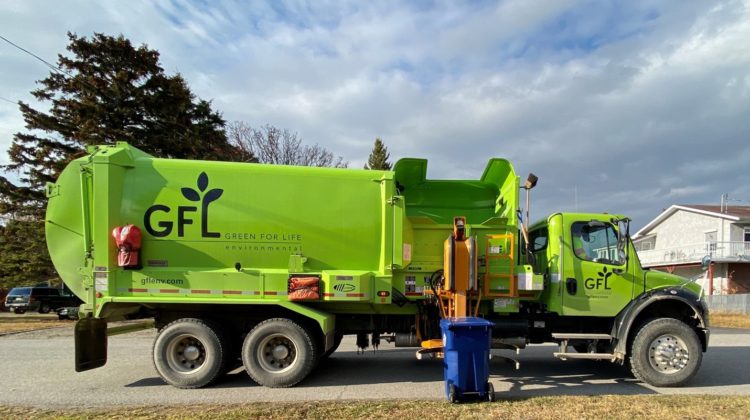 A GFL recycling collection truck in action in the District of Invermere, similar to what residents in Cranbrook will see around the City in the spring. (Supplied by City of Cranbrook)

RecycleBC and the City of Cranbrook have entered a five-year funding agreement for single-stream, automated curbside recycling collection.

The program is scheduled to launch in spring 2021, as GFL was awarded a three-year contract to carry out curbside recycling in the community. GFL then has an option for a two-year renewal.

Cranbrook’s agreement with RecycleBC provides the City with an annual $236,041 incentive to provide recycling services to residential households.

Mike Matejka, Manager of Infrastructure Planning and Delivery with the City of Cranbrook told MyEastKootenayNow.com that any of the large manufacturers and suppliers of recycled materials pay a tax or service fee and that goes to Recycle BC as an incentive for that material to be returned. Through Cranbrook’s program, Matejka said the City would receive that incentive funding.

“Through this contract, it looks like the money that we do get from Recycle BC will essentially cover all of the cost of the program itself, so it should be a net-zero cost to the taxpayer and providing a great new service.”

Matejka said City staff have been working closely with Recycle BC and GFL to make sure that the program not only provides a great service but also runs as smoothly as possible.

At this time, the City of Cranbrook is working alongside the Regional District of East Kootenay (RDEK) and RecycleBC to implement a public education campaign and a transition to curbside collection.

Full details and information for the recycling program will be provided to Cranbrook residents in early 2021.