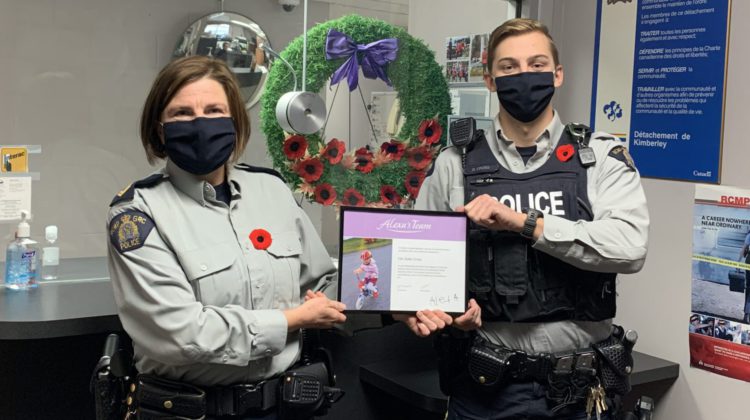 Kimberley RCMP Cst. Dylan Cross has been recognized as an Alexa Team member for the second time after reportedly apprehending 41 impaired drivers in 2019.

Alexa’s Team is an honorary membership given to RCMP and municipal police officers who make “extraordinary” contributions to stop drivers on B.C. highways and roadways that may be impaired by drugs or alcohol.

Back in 2008, four-year-old Alexa Middelaer was killed by an impaired driver in Delta. Her death then led to the provincial recognition program in her honour, called Alexa’s Team.

“Cst. Cross is dedicated to traffic safety, which is a strategic objective of the Kimberley RCMP,” said Cpl. Kate Bamber, Acting Detachment Commander for the Kimberley RCMP. “We are proud of his efforts and commitment to making our roads safer.”

This is the second time in Cst. Cross’ career that he has been named to Alexa’s Team for his work against impaired driving in Kimberley and the surrounding area.

“Impaired driving is a completely preventable crime, and yet people continue to be killed and injured by it every day,” added Andrew Muris, MADD Canada Chief Executive Officer. “By taking impaired drivers off the roads, the outstanding officers who are part of Alexa’s Team are helping to prevent these tragic deaths and injuries, and are making roads and communities safer for everyone.”