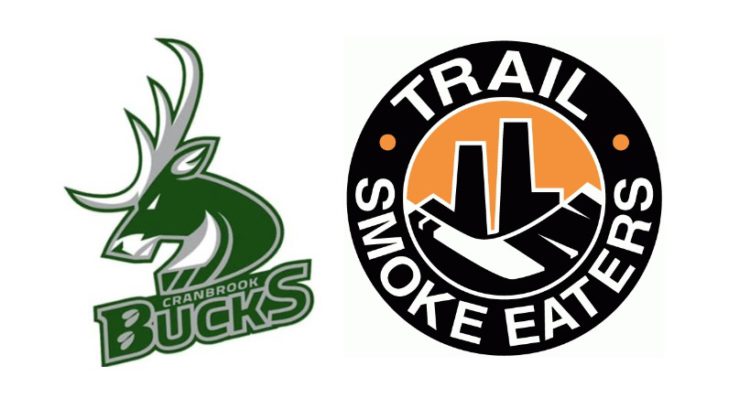 The Cranbrook Bucks and the Trail Smoke Eaters each took a game following their pair of exhibition matchups this weekend at Western Financial Place.

Playing their first exhibition game in Cranbrook on Friday, the Bucks took Game 4 of the pre-season Kootenay Cup 4-1. Bucks captain Briggs Gammill scored the opening goal of the game and the first-ever at Western Financial Place for the franchise, while also adding one more in the third to complete Cranbrook’s first exhibition victory on home ice.

Dane Dowiak also scored a pair of goals for Cranbrook in the win. Both players finished with 3 points (2G, 1A) while Jacob Zacharewicz earned the victory between the pipes.

On Saturday, the two teams met in Game 5 of the Kootenay Cup. Trail would take back a 3-2 lead in the pre-season series with a dramatic 6-5 overtime victory.

Following a scoreless opening period, the Bucks burst out to an early 3-0 lead in the middle frame with goals from Michael Hagen, Dowiak, and Gammill. However, the Smoke Eaters would score five unanswered goals in response, four of which were scored in the second. Gammill would score his second of the contest for the Bucks and Carson Kurylo would tie the game in the second half of the third period, forcing overtime.

In the extra frame, Dowiak would get a two-minute minor for interference, putting Trail on the power play. Captain Cody Schiavon would then score the game-winner on the ensuing power play to give the Smoke Eaters the 6-5 victory.

Watch the game-winner below:

Now with Trail leading the pre-season Kootenay Cup 3-2 through five games, the rivals will now have to wait until November 21st and 27th to close out the series. Those two games will be the final exhibition matchups for either team ahead of the BCHL’s proposed regular season start in December.

For Cranbrook, the Bucks will host the visiting Prince George Spruce Kings this upcoming Friday and Saturday from Western Financial Place. Friday’s contest will drop at 7:00 pm, while Saturday’s will hit the ice at 4:00 pm. Both games can be watched exclusively with a subscription to BCHL TV (HockeyTV).