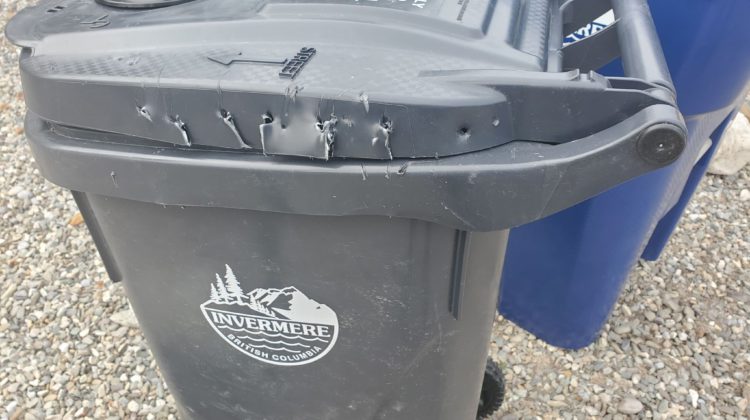 One of Invermere's new garbage bins, complete with claw marks. (Supplied by the District of Invermere)

The new garbage bins issued by the District of Invermere are not bear-resistant, according to WildSafeBC Columbia Valley.

The bins were distributed to residents as part of the community’s recent move towards automated garbage collection.

Invermere said the new bins are an improvement on the old variety, but they are still not bear-proof or bear-resistant.

“For a bin to be deemed bear-resistant, it undergoes a test in which a grizzly or black bear cannot access the bin for at minimum an hour. Since bears are incredibly smart, adaptive, and powerful animals, it is rare to find any fully bear-proof container,” said the District of Invermere.

The District added that safe storage of bins between pickup days, away from wildlife, is up to residents. Keeping bins indoors will keep the community safe from wildlife and prevent unnecessary animal deaths, it also aligns with Invermere’s bylaw number 1426, which prohibits the feeding of deer and controlling of wildlife attractants.

Excess garbage can be brought to the Invermere Transfer Station on Industrial road 1 in Athalmer or the Columbia Valley Landfill at 1884 Windermere Loop Road, both of which are open seven days a week.