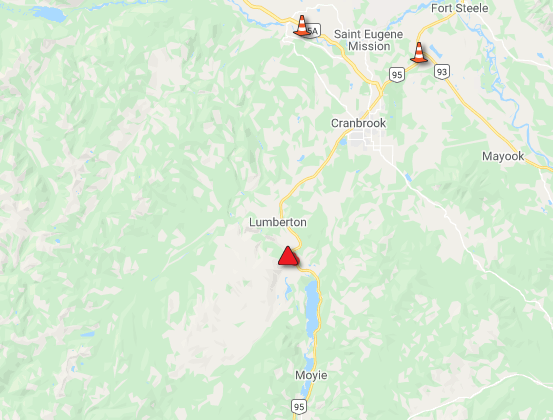 Collision on Highway 3 reducing traffic to a single lane on October 8, 2020. (Supplied by Drive BC, Google Maps Data)

Drive BC is reporting that Highway 3 has been fully cleared following an early morning collision which closed the highway for nearly two hours between Moyie and Cranbrook.

RCMP have yet to confirm any details of the collision, but more details will be provided as they become available.

According to early reports, the incident was between three total vehicles, including a semi-truck and trailer. However, details have not been fully confirmed from RCMP about the collision scene.

Highway 3 was fully closed earlier in the morning as a result of the collision, around 3:50 am before a single lane was opened around 6:30 am. Tow operators arrived on scene around 8:00 am and are working to help clear the scene and have the highway fully open once again.

More details will be released as they become available.