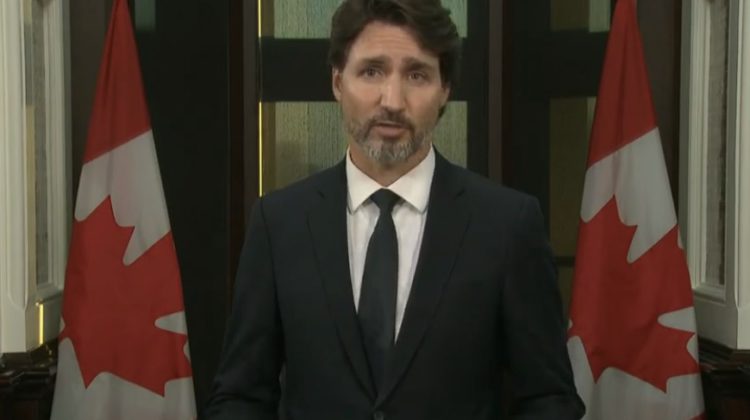 Prime Minister Justin Trudeau delivering his address to the nation on Wednesday, September 23, 2020. (Supplied by CPAC)

The Prime Minister took to national airwaves Wednesday to reiterate much of what was already said in the Throne Speech earlier in the day.

Justin Trudeau told Canadians the country is at a crossroads and that we are in the fight of our life against COVID-19. He said in our four major provinces the virus is coming back in force and the second wave isn’t just starting, it is well underway. He warned this fall could be much worse than the spring.

“But what we can change is where we are in October, and into the winter. It’s all too likely we won’t be gathering for Thanksgiving, but we still have a shot at Christmas.”

He reiterated the need to uphold public health measures like wearing masks, maintaining physical distance, and keeping social circles small. He urged everyone to download the COVID Alert app.

In his address, he also reiterated his government’s commitment to creating 1-million jobs, extending the wage subsidy program into next summer, and creating a national childcare and early learning program so, “no mother has to put their career on hold.”

He said that combatting climate change is the best way to create new jobs through green energy retrofits.

“We must keep making progress on reconciliation with Indigenous people in Canada,” added Trudeau. He said diversity is Canada’s “competitive edge.”

The Prime Minister reiterated the government’s commitment to a national pharmacare program to ensure Canadians get the medications they need.

Addressing what he thinks is likely on everyone’s mind, Trudeau said that the federal government can afford to spend this money because of low-interest rates right now and that spending less would mean a slower recovery and cost more in the long run. He assured Canadians that the government will continue to keep investing in the country’s recovery.

Trudeau ended his address by recognizing that Canadians are tired but said the future is ours to decide and together, “there is nothing we can’t do.”

The Conservatives have already said they will not support the Throne Speech but the NDP was non-committal saying they needed more time to look over the plan before making a decision. The Throne Speech will kick off a series of confidence votes for the minority Trudeau government in the next few days. The Liberals must garner support from at least one other party in order to avoid forcing a federal election.