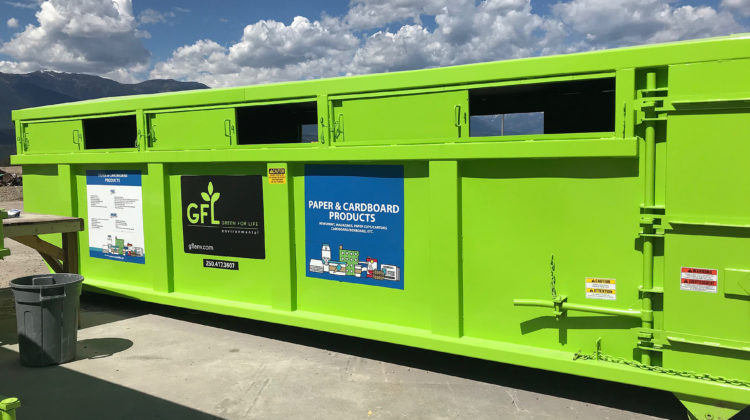 The bins and totes at the current Columbia Valley Recycle BC Depot will soon be relocated to the Transfer Station in Invermere’s Industrial Park. (Supplied by the RDEK)

The RDEK said the move will make its recycling depot more accessible to Columbia Valley residents.

“We have had support from the public on the opening of the Recycle BC Depot in the Columbia Valley; however, we have had feedback from users and through our recent Solid Waste & Recycling Services Survey that people would like to see a more accessible location closer to Invermere,” explained Kevin Patterson, Environmental Services Manager. “As a result, we have been working with the District of Invermere to incorporate the Recycle BC Depot at the Invermere Transfer Station next to the public works yard on Industrial Road #1, and are excited to announce the re-located depot will be open in that location September 28th.”

The Recycle BC Depot allows residents to recycle a wide range of materials that are not accepted in the local yellow bin program, such as Styrofoam, #7 plastics, milk substitutes, zippered bags like Ziplocs and pet food bags, aerosol cans and more.

“It is really important for people to remember that the Recycle BC Depot is for residentially generated recyclables only and is a totally separate program from the yellow bin program or curbside recycling in Invermere. So, if people want to access these expanded recycling opportunities, they have to do it at a designated Recycle BC Depot,” said Paterson. “The Recycle BC Program requires depots to be run with very specific guidelines, including gated and staffed locations. As such, our yellow bin program does not meet their program specifications.”

Additionally, the RDEK said it gets paid for every tonne of recycled materials collected at the Recycle BC Depot, as opposed to paying for the yellow bin system.

While the new Depot will move into Invermere next week, the yellow bins will remain, as they only accept paper, cardboard, tin/aluminum cans,
grocery/shopping bags and plastics #1 though#6.

The RDEK has Recycle BC Depots in the Kimberley, Cranbrook, Elkford, Sparwood and Fernie Transfer Stations.

More details about what can and can’t be recycled at the Dept can be found here.