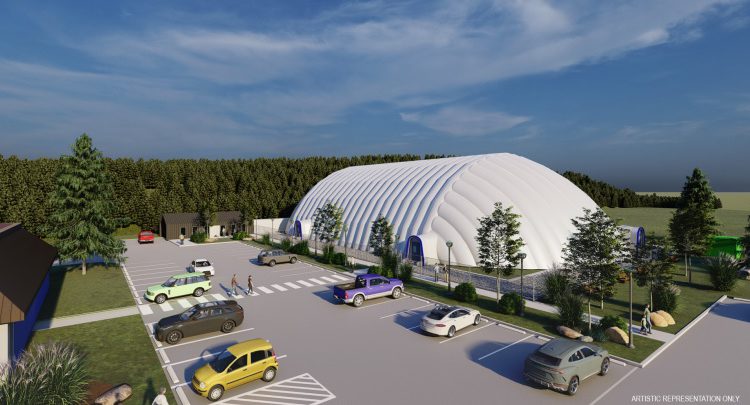 An aerial artist rendering of the Cranbrook Indoor Sports Facility in Balment and its final design. (Supplied by KEYSA, Berry Architecture Associates)

The motion was brought forward by the City of Cranbrook Finance Department to grant KEYSA the 100% exemption, passing in a 4-3 vote by City Council.

“It’s nothing against KEYSA whatsoever, I think what they are doing is fantastic for our community,” Peabody told MyEastKootenayNow.com. “I think in my opinion, it’s not something that they asked for, this is just something that we’re offering and basically what we are assuming is that they cannot pay their taxes this year and we have no idea really what the demand is for the product once they get their dome up and completed and they’re open for business.”

“To just offer them 100% tax exemption without really knowing what their financial position is just didn’t seem right to me,” added Peabody.

“If they haven’t asked for it, why are we just offering it up? We don’t offer other groups, organizations or businesses – we don’t just come to them and say here we’re going to give you a tax exemption.”

However, Pratt did note that the rest of Council thought it would be helpful to provide some support to KEYSA. in what would otherwise be a difficult construction year.

“Due to COVID and the restrictions they are going to be under when they do get up and operating, I think some of the councillors felt it was in good faith to let them have that first year’s exemption,” Pratt told MyEastKootenayNow.com.

Councillors Norma Blissett, Wes Graham, Wayne Price, and John Hudak were all in favour of the tax exemption. Blissett and Graham both pointed out that the City of Cranbrook wasn’t receiving tax revenue from the Balment Park lands before KEYSA’s construction and that they could offer some support by letting the first year pass by.

“With the new construction build and the COVID-era that we’re in it’s going to be a hard go right off the bat for KEYSA as it is with any recreation facilities that we’re dealing with, whether it’s private or public,” said Graham. “My rationale behind it was we give them the tax exemption for year one, it hasn’t cost us anything to do that, and then we roll into the normal tax exemption that sports and recreation can apply for.”

As per the City of Cranbrook’s Permissive Property Tax Exemptions, athletic and recreation facilities can apply for up to 50% exemption every year.

“As they are a non-profit society and everything is built on donations, there is a chance that if they were not to pay that 50% they’d be coming to the City for a grant-in-aid or another source to try and cover it,” Graham told MyEastKootenayNow.com. “It isn’t a revenue that we have in already, and then with a non-profit, that is trying to build a facility for recreation, that it made sense.”

Passing narrowly in the 4-3 vote, KEYSA will have a full 100% tax exemption for 2021. The group will then have to apply in order to receive a 50% property tax exemption for the Indoor Sports Facility in the coming years, as is available to athletic and recreation facilities in Cranbrook.

Construction on the Cranbrook Indoor Sports Facility is underway and should be complete by the end of October if all remains on schedule.

You can see the full Cranbrook City Council exchange on the issue below, starting at 1:51:45.