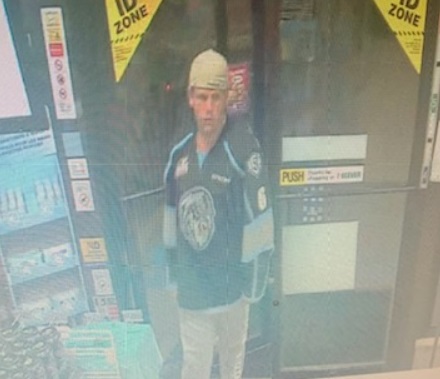 A potential suspect in several thefts from vehicles in Cranbrook on Sunday, September 13, 2020. (Supplied by Cranbrook RCMP)

In the early morning hours, RCMP said they received several calls about thefts from vehicles.

Police later learned that one of the stolen credit cards had been used at a local business.

“Officers were able to get a photo of the suspect and are asking members of the public to help identify the male,” said RCMP.

Cranbrook RCMP described the suspect has a Caucasian male with puffy hair and light pants, standing about 6’0″ tall. and weighing approximately 200 pounds.

Anyone that may be able to identify the man is asked to contact the Cranbrook RCMP detachment at 250-489-3471 or to contact Crime Stoppers at 1-800-222-TIPS (8477) or online at canadiancrimestoppers.org.