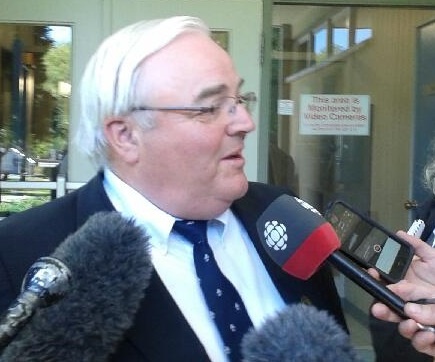 In front of the Cranbrook courthouse, Blackmore said he’s simply guilty of living out his faith.

“For 27 years and tens of millions of dollars later, all we’ve proved is something that I’ve never denied. I’ve never denied my faith,” Blackmore told the media. “My instructions to Mr. Suffredine were to defend me on the grounds that this was my faith, that’s what he did, he did a good job. This is what we expected.”

A notice of application for a Canadian Charter of Rights and Freedoms argument is expected to be filed by Blair Suffredine, legal counsel to Winston Blackmore.

“This is simply one more step in what has been a fairly involved criminal process,” said Dan McLaughlin, Communications Counsel for the B.C. Prosecution Service. “Counsel for Mr. Blackmore has filed notice of his intention to challenge the proceedings based on a number of factors. Mr. Oler is expected to be joining in some of those submissions and the Crown will have an opportunity to continue its position and file its response.”

Although Winston Blackmore and James Oler were both found guilty by B.C. Supreme Court Justice Sheri Donegan, neither has been convicted as there is still a number of common law and constitutional challenges being made by both parties in relation to the trial.

“This is entrenched in our faith and I would have been hugely disappointed if I would have been found not guilty of living my religion,” added Blackmore. “I am living my religion, it is a part of my faith, it is something that is hugely important to me and to my family and to my father and his father and going back and hopefully going forward generations.”

Those arguments are expected to be ironed out in the coming weeks as the parties elected to convene in Kamloops August 21, 2017. During that time they will fix a date for when to hold a three-day hearing and case management conference, detailing the challenges that will be made following Donegan’s ruling what may be the next course of action.

“I could have said on day one I’m guilty of living my religion and that’s all I’m saying today because I’ve never denied that,” concluded Blackmore. “That was the ground that we went forward with our defence.”