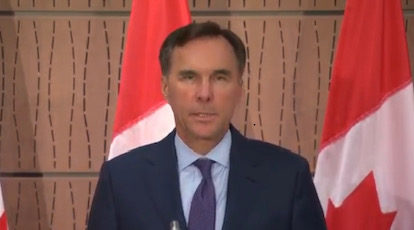 In a media briefing Monday evening, Morneau said it was never his intention to run for more than two election cycles. He informed Prime Minister Justin Trudeau on Monday that he would not run again in the next election.

Morneau is immediately stepping down from his roles as Finance Minister and MP for Toronto Centre. Morneau said he will now begin to prepare to run for the position of Secretary-General of the Organization of Economic Cooperation and Development (OECD).

Both Morneau and Trudeau are the subjects of a House of Commons Ethics Committee investigation for their involvement with WE charity, where both men have close personal family ties with the organization that was given an almost billion-dollar contract to run a youth volunteer program for the federal government.

Morneau said he was not asked to resign by the Prime Minister. He said he does regret he did not recuse himself from the discussions surrounding the WE Charity. Morneau disclosed during testifying that he repaid $41,000 in travel expenses the morning of his ethics committee testimony for a trip he and his family had taken with the charity group.